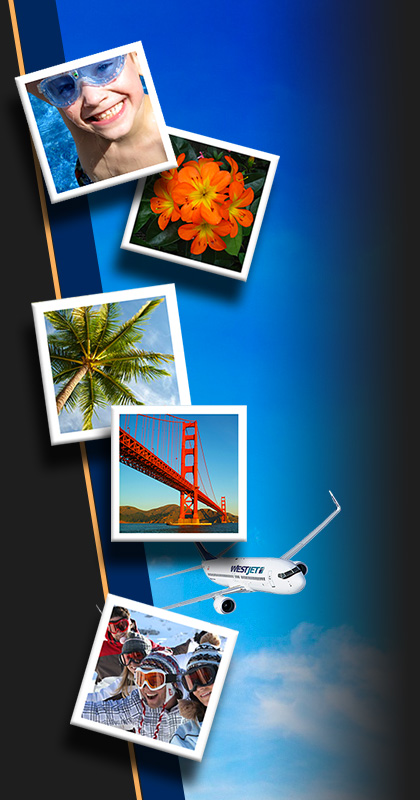 Task: Development and digital strategy for the Picture Yourself Somewhere Else microsite

In order to promote awareness of the new scope of operations for this highly unique carrier, the “Picture Yourself Somewhere Else” Promotion was conceived. As a multi-million dollar campaign that tied together both digital and offline promotions, the campaign was primarily focused on creating awareness of new destinations along with promoting brand and culture development.

A microsite was created, and the promotion was born.

Instant win opportunities, (both in the real world and online), fueled traffic to the pictureyourselfsomewhereelse.com domain, and through online signups and user interaction we were able to gather valuable demographic information as well as additional analytics that were totally unknown at the time, with prime examples such as which WestJet destinations were the most popular, and how often guests booked trips for business, pleasure or otherwise.

This information directly led to the formation of WestJet Vacations, a completely new division of the company that focuses primarily on the vacation travel market.

In addition to online trivia games, surveys and chances to win free flights for a year, visitors to the site were able to create their own virtual postcards. Central to the promotion, this popular feature allowed guests to virtually, and literally, “picture themselves somewhere else”.

As a highly unique offering at the time, this interactive and viral tool utilized the selection of new destinations and allowed guests to upload photos of themselves and easily compile a digital postcard featuring their smiling mug and a quick message, and fire it off to their friends.

By today’s standards that may seem simple, but remember, this was created back in 2004 – that’s 6 years before Instagram was a twinkle in the eye of it’s creators, and 7 years before snapchat was even a thought.

Thousands of postcards were sent out, tons of demographic and usable data was gathered, a unique brand and culture was established, and guests were rewarded.

The promotion ultimately was a huge success and a win/win for both WestJet and it’s guests – The former with the establishment of a new division focused on new markets and additional revenue, and the latter, who walked away with over 4 million dollars in prizes.

WestJet – Picture Yourself Somewhere Else